I finished my #100happydays challenge a couple of weeks ago and here are the final 25 pictures.

I definitely got in the habit of thinking about the day’s photo and it was a little bit weird when I didn’t have to do it (I know I never HAD to to do it, but I was determined to do all 100 days). So here in full glory is one hundred things that have made me happy (or grateful, pleased, content, or not-so-sad)

Picture 100 was taken the day I got discharged from the physio and she said I could try to knit again (as long as I take regular breaks every half-an-hour and keep up with strengthening exercises) so I’m hoping for a summer of knitting.

Do you remember Karen started the sewlution jar in January? Well I threw my name into the jar with this main goal: I am going to make less but what I make will be better. Lets see how I did…

I learnt some more couture techniques from reading and online tutorials, which I used to make my turquoise couture jacket; The majority of this was finished by hand, which took lots of time, but was to a finish I’m really proud of. I took my time making dresses this year, using higher quality fabrics, and spending much more time on the muslin process and using better pressing techniques to get a better finished garment. I’m not sure if I have really made less, but most of what I have made will be worn for years to come. I’ve made more classic quality pieces and less impulsive fast fashion garments, so I think I can say my Sewlution was achieved, oh Mistress of the Jar!

Other goals I set were:

I think I had a pretty good go at those plans, but the main change has been my attitude to my crafting; more planning and precision has led to more successes. If you want to read my plans for 2014 you can see them here.

Thank you so much to everyone who has been reading and commenting this year 🙂 Hope you have a fantastic new year and I’ll see you in 2014!

I thought I should write a quick post before I go back to work tomorrow and get busy with real work again, so here is a quick round up of some of the things I’ve been up to this weekend.

What do you think should happen to T-Rex? Have you been crafting this weekend?

Yesterday morning I bought these rather large, shiny and feathery earrings on sale.

Hmm… a bit big for my taste, what to do with them… What if I were to break them up with wire-cutters and pliers, what could they become?*

A whole sash-worth of medals fit for a Queen! Hem a long strip of lining fabric to become the sash, add some fur and ribbon to the top of a cheap bed-sheet for a ceremonial robe, and cover some card with LOTS of glitter to make a crown and… hey-presto! A fancy dress outfit fit for a Queen!

A friend had her annual birthday karaoke do and this year the theme was “Best of British”. She was Amy Winehouse, there were policewomen, cricketers, Olympic Games Makers, a traditional British gentleman, Boy George and Freddie Mercury (from the ‘I Want to Break Free’ video, complete with vacuum attachment) and I was HRH The Queen.

Here is Her Majesty singing Total Eclipse of the Heart with Miss Winehouse – lots of passionate gesturing and pointing happens to look just like a royal wave. The crown barely survived the night -there was nobody to carry an umbrella over my head – but the rest is going into storage and is going to the top of my Best Fancy Dress Outfit list. I also sang The One and Only because it is an awesome song, but it turned out to be a good song for the Queen to sing.

I took some cakes and it was easy to make them themed with just some red and blue icing (and Haribo sweeties for the birthday girl). They aren’t totally accurate but under the flashing disco lights they looked good enough. And people were a little too tipsy to notice that some were a bit over-baked!

* It is slightly worrying how easily they fell apart, I barely had to use tools. I also have 14 feathers that I need to find a use for… any suggestions?

On Sunday I went to visit Vixie to watch lots of Disney films with Georgia and Yoyo the cat.

I got the grand tour of her studio which was FULL of all sorts of lovely crafty goodness. Remember my organisation of my sewing supplies– well Vixie has four of these units, and that is not even her main type of storage. I suppose she is making crafting a full-time business so she is allowed to have more than me, but I was still very envious!

She has a thorough breakdown of the day’s fun on her blog, but I thought I should share the goodies I made…

The purple cupcakes are classic vanilla* sponge, with pink buttercream, sprinkles and fondant butterflies. The pink cakes had fresh raspberries mixed in the sponge and were topped with buttercream, pink sugar and handmade fondant roses. This was my first attempt at making these roses (I’ve never had such a girly day to cater for before!) but I was really happy with how they turned out.

* Yesterday I listened to a really interesting programme about vanilla on Radio 4. Did you know that vanilla flowers are so tiny, only one or two types of bee are able to pollinate them? The farmer interviewed had to pollinate each flower by hand, which goes some way to explain why vanilla is the second most expensive spice.

As a little thank-you to Kristen for her generous giveaway, I made her a little card. She is a scientist, so I found this super cute scientific embroidery design at The Floss Box. Of course I posted it before taking a picture for my records (I always do this with gifts), but luckily Kristen has taken a picture of the Cupcakeium. 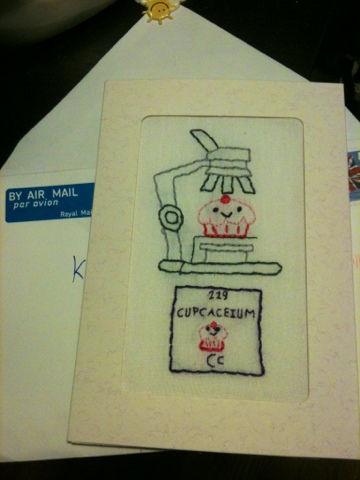 Yesterday was a friend’s birthday drinks so I made some cupcakes to give her. Despite the sudden chilly weather, I was feeling inspired by spring and decided to make raspberry and lemon cakes.

Start with a classic sponge recipe – half the mixture had vanilla extract and the other half had lemon rind and juice.

Cut the top off each cake, fill with raspberry jam or lemon curd, and trim the lid so it fits back on the cake.

Cover with buttercream  icing, sprinkles and decorations. If flavouring the icing with lemon juice, rind and then swirling with lemon curd (very highly recommended) remember to add extra icing sugar so it doesn’t get too gooey.

Cut or bite in half to reveal the hidden surprise in the centre.

As you can see, the two boxes were appreciated during the evening (did anyone have real food for dinner?!)

I recently moved house so things have been a bit quiet on the blogging/sewing front while life got in the way, but, with only two and a half boxes left to unpack I decided it was time for some crafting 🙂

I bought a second-hand sofa for my new living room that is a lovely burgundy-pinky colour, almost the same colour as some cushions I made from a felted jumper years ago. Notice the word almost – time to make some new cushion covers!