Do you remember Karen started the sewlution jar in January? Well I threw my name into the jar with this main goal: I am going to make less but what I make will be better. Lets see how I did…

I learnt some more couture techniques from reading and online tutorials, which I used to make my turquoise couture jacket; The majority of this was finished by hand, which took lots of time, but was to a finish I’m really proud of. I took my time making dresses this year, using higher quality fabrics, and spending much more time on the muslin process and using better pressing techniques to get a better finished garment. I’m not sure if I have really made less, but most of what I have made will be worn for years to come. I’ve made more classic quality pieces and less impulsive fast fashion garments, so I think I can say my Sewlution was achieved, oh Mistress of the Jar!

Other goals I set were: 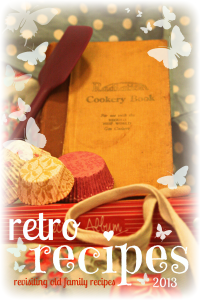 I think I had a pretty good go at those plans, but the main change has been my attitude to my crafting; more planning and precision has led to more successes. If you want to read my plans for 2014 you can see them here.

Thank you so much to everyone who has been reading and commenting this year 🙂 Hope you have a fantastic new year and I’ll see you in 2014!

It is time for my Top 5 of 2013 (as organised by the lovely Gillian. I can’t believe this time last year I didn’t know her!). I have to review my Sewlutions tomorrow for the Mistress of the Jar, so I’m going to pack a lot in this post…

Lets start with the misses…

I had a lot of trouble choosing my hits as I’ve made so many nice things this year; I feel my sewing has improved and I have a better sense of what suits me now, so there were less disasters.

As a thank you for reading all that reflection, here are some pictures of some of my projects that didn’t make the top 5 hits… To see them in more detail, click on the newly organised pages at the top of the blog 🙂

Last May I was on my way home from the supermarket, passing a vintage charity shop, when I spotted some dress forms on the pavement. They were on sale for £10 each. Wow! Bargain!

I put my shopping bags and investigated. The shop had rearranged their displays and so had some extra mannequins they no longer needed, so wanted to get rid of them. I picked the lightest adjustable form, it was wrapped in a bin bag to protect it from the rain, and I took it home.

Once home I measured it and it was rather different from my measurements. By 7 or so inches at the full bust. Luckily Threads magazine (issue 161) had a great tutorial from Kenneth D. King about making covers for dress forms – in some theatres they make covers to match the actors’ measurements, which can be added to just a couple of dress forms, allowing for precise fitting and saving storage.

I draped a muslin cover for the form (on its largest setting) and added a zipper at the back, in case I wanted to remove it for any reason. Then I started padding it out. I wrapped it up in thick batting until it approximately matched my waist measurements. I put an old bra on it and kept padding it out. The original plan was to baste all the layers of batting together and to the muslin inner layer, but it soon became apparent that this would be a lot of effort; am I really going to remove my cover that often. 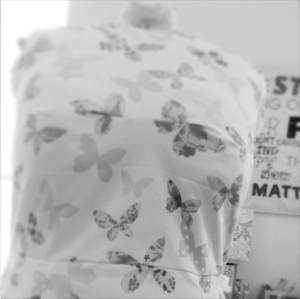 I used a fitting-shell pattern I had worked on a few years ago to create a skin-tight bodice and upper-skirt (and amazingly the shell pattern was still a perfect fit), adding armhole and neck covers. I tried the cover and needed more wadding to fill it out, so had a break until I could get a   fourth bagful of batting. Fully fitting the form was a challenge, especially on my wrists due to the pressure needed to get a firmly stuffed body, so this was done over a long period of time. I stuffed and stuffed, then checked my measurements, then stuffed some more, until the form was close enough to me (I think it is an inch too small around the full bust, but I never wear skin-tight over-fitted garments so it shouldn’t be a problem).

Finally I fused some ribbon to the form to mark the centre front, bust and waist lines. If they look a bit wonky, it must be the shape of my body as they are level in real life! Maybe there is a way to quilt all the layers together, but for the moment it is fine the way it is.

The form didn’t have a stand, so I made a few trips to my local hardware store. I bought a 1m chrome tube and a handful of rubber washers. I attached the tube, using the washers, to the inside of the form, where there was already a larger tube (lots of measuring was involved). At first I put the tube inside an old tripod base (the top had broken as it was fairly cheap) but this wobbled and was very unsteady. I went back to the hardware store and got some heavy weights (for window cords?) and made little pouches to tie these to the tripod legs. This didn’t work either 😦 Then I remembered I had a fan under my bed from a heatwave a few years ago; we had bought a big fan during the heatwave, but it was so strong and noisy we could hardly use it. It has been gathering dust, so I took the base and put the dress form on top. This was so much more stable and sturdy, due to the heavy, heavy, round base.

£10 for dress form
£5 for hardware
£12 for fabric
£ lost count for batting
=£40-50 for a personalised dress form to help fit and drape custom-fit garments. Quite a bargain in my books.

I am so glad you liked my FBA tutorial for the Anna dress 🙂 (And I am glad you realised how much effort it was; I took photos as I went along, but it wasn’t until I was editting them that I realised how many steps there were!)

I have sewn my bodice muslin (well in a cheap fabric that I will use for first wearable test version) and realised the gathers I have are a bit too big to be flattering. Do you remember my Cambie dresses? I had the same problem there; with a full bust, the size of darts/gathers is big, so the darts begin to make a pointy corner. And how did I solve that problem? I changed the darts from one to three, so each dart was slightly smaller and less pointy!

Here is a quick diagram to show the extremely scientific method I used to adjust the gathers on my Anna (after unpicking the first set). Following my FBA tutorial, work your way to step 20, and stop there. Changing gathers is easier than changing darts, as you don’t have to worry about the pointy dart ends. For my measurements I narrowed each pleat by about an inch (technically it was a thumbnail length). I then created a new pleat in between (green lines), making sure it was the same size as the amount I removed (2 red lines below). This gave me 3 approximately equal pleats, but you could measure them and do some maths (if you haven’t spent all day teaching 4 year olds how to sit quietly! this method is good enough for me!)

And here is how the pleats now look in real life:

Dodgy camera-phone shots in the mirror, but I think you can see the effect. I have pinned and re-sewn the pleats more than my fabric could cope with, so I need to cut out a new bodice before I can carry on with the sewalong. Who else is sewing along? How is it going?

Warning: This is a long post, full of pictures, but only because you requested fitting tutorials!

I am definitely on the By Hand London bandwagon and love the drafting of their patterns, however I was a little disappointed by the FBA (full bust adjustment) advice in the Anna dress Sewalong. The method is fine if you just have a tiny bit to add, but I have read lots of people saying they had big or gaping necklines on their Anna dresses; the method they show will cause/add to this problem, so here is how I did my FBA (using the Y-Method for adding more than 1.5″).

Before we start I’m going to explain why I am using my high-bust measurement instead of my full-bust. Hopefully these pictures will make sense to you, but let me know if you have any questions.

Patterns are graded to fit different sizes, but the shape of the garment usually remains the same or similar proportions (a). Most commercial patterns are drafted for a B or C cup, and if you are much bigger than this then your proportions will be different (b). Someone with a full bust measurement of X could either have a full-frame and wear a B-cup (c – outer black line), or have a smaller frame and wear a GG-cup (c – red line); your high-bust measurement is a better indicator of your overall frame. When choosing your size (d) it is better to fit to your high-bust and adjust, otherwise you will have extra fabric above and below your bust (e); it is easier to fit the waist with darts/gathers but a baggy/gaping neckline is harder to fix.

Does that make sense? I hope so! So now you need to measure your high-bust and full bust, and we can get started…

And we are done! It sounds like a lot of stages, but it really does make difference to the fit around the neckline and shoulders. Before you cut into your yummy fabric, it is a great idea to make a muslin in cheap cotton (or similar weight to your fashion fabric). My fabric for the sew-along was only £1.50pm (it has a tiny fault every 75cm) and I got plenty so I am going to make a wearable muslin of the whole dress.

I really hope this is useful. If there are any questions or if anything isn’t clear, please ask in the comments below and I can try and explain.