I read about The Napkin Project a couple of months ago on Melissa’s blog and thought it sounded like a great project; a nice little embroidery project that can hopefully have a positive impact on the life of someone with dementia. Dementia is a subject I have learnt more and more about over the past few years, as it has affected both my grandmothers. I quickly signed up to take part.

“When is a napkin not a napkin? When it’s something to keep your hands busy. Or a bag. Or a hat. Or an aide-memoire.
While she was involved with a project to create artwork for a new dementia care home, artist Deirdre Nelson noticed that residents in Brunelcare’s existing Saffron care home were often fascinated by the textured edges of items, playing with, handling and exploring objects such as the napkins they used at mealtimes. A member of staff told her that one resident would join napkins together to carry her possessions around with her or that another used hers as a vase to hold flowers; a napkin became more than just a napkin.
The Napkin Project evolved out of this observation and the other artwork that was created for Saffron Gardens. It has now grown a life of its own.”

The Napkin Project asked people to embroider napkins to be given to residents with dementia at a care home; the napkins are intended to provide tactile stimulation and engagement and act as a prompt for social interaction. We were asked to embroider with a design that originated from the idea of home.

What does home mean to you?
“What does ‘home’ mean to you if you are a person living with dementia? Maybe it’s where you were born or grew up – a suburb of Bristol, a village in the Punjab or a small town in Jamaica? Chances are it is where you have been happiest among family and friends. Could it be the residential care home where you now live?”

Both my grandmothers have experienced dementia, with different effects and symptoms. When thinking about the design for my napkin, I thought how my grandma’s memory has gone and how she now spends most of her time in her childhood memories; I didn’t want to create something too specific to me or too modern that could confuse residents further, so I decided to recreate a simple child-like house that would hopefully feel familiar and reassuring (the simple design also meant I’d have more chance of completing it with my poorly wrists). 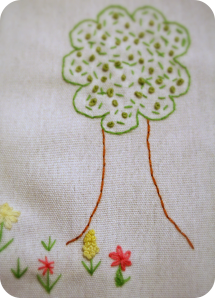 Another reason I was so keen to finish this project was that between hearing about it and completing my embroidery, I lost two of my grandparents whose live have both been affected by dementia; My grandad, who did not have dementia himself but had to visit his wife who often did not recognise him, and my grandma, whose dementia left her unable to have a conversation. Watching close family deal with dementia is horrible, especially when they themselves are aware that their thoughts are not quite right and that something is wrong, which is why I was so keen to do a little something to make things easier for someone.